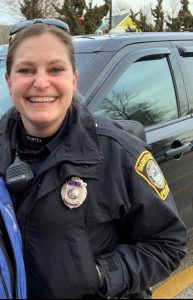 Chief Matthew Sonnabend is pleased to announce that Barnstable Police Officer Danielle St. Peter has been recognized for her excellence by being a recipient of the Fifth Annual Attorney General’s Award for Distinguished Service in Community Policing, one of only 18 recipients in the United States, and one of two from Massachusetts.
United States Attorney General Merrick Garland announced the awards yesterday in Atlanta and congratulated the recipients on a virtual call. “The officers and deputies receiving this year’s awards demonstrate how so many go above and beyond, even in the midst of trying circumstances”, said Attorney General Garland. “Every day, thousands of people who work in law enforcement forge and maintain strong community ties that are essential for ensuring public safety. The recipients of this award represent quintessential examples of such critical efforts. It is an honor to recognize them.”
United States Attorney for the District of Massachusetts, Rachel Rollins, spoke with Chief Sonnabend and offered her congratulations as well. “Officers St. Peter and Hart are exemplary representatives of our law enforcement community, and their selflessness and commitment to serving their communities is what earned them today’s honor,” she said in a statement.
The Attorney General’s Award recognizes rank and file law enforcement officers for their exceptional efforts in effective community policing. The awarded officers have demonstrated active engagement with the community in one of three areas: innovations in community policing, criminal investigations, or field operations. This year, there were 185 nominations from 145 agencies, recommending a total of 347 individual officers, deputies and troopers. Officer St. Peter was one of only four recipients for innovations in community policing.
A portion of the award reads, “Officer Danielle St. Peter’s commitment to the Barnstable Police Community Impact Unit (CIU) has dramatically benefited local residents. The CIU works with partner agencies to bring medical care, substance abuse treatment, mental health counseling and housing services to homeless and disadvantaged populations. St. Peter routinely assumes the role of case manager, counselor and problem solver by using an individualized approach to de-escalate tense situations and connect people with services tailored to their needs.” “St. Peter’s upbeat attitude, conflict resolution skills, patience and work ethic are part of her extreme effectiveness and a true demonstration of community policing.”
Chief Sonnabend said, “We are extremely proud, but not surprised that Officer St. Peter was the recipient of this national award. She exhibits her dedication to our community, especially those less fortunate or in crisis every day, and brings great passion, perseverance and empathy to her problem-solving, and builds solutions for those in very difficult circumstances. She brings great credit to the Community Impact Unit, the Barnstable Police Department and the Town of Barnstable.”
Officer St. Peter has been a member of the Community Impact Unit since 2018, and a Barnstable Police Officer since 2011. She is a member of the departments Peer Support Unit, a Mental Health First Aid Instructor, and has attended training in Human Trafficking Awareness, Suicide Prevention and Interventions, Trauma to Addictions, Crisis and Group Crisis Interventions, and Gang Awareness and recognition, among others. She previously worked as a Police Dispatcher and has been a town employee since 2003. She is a proud life-long resident of Barnstable and graduated from Barnstable High School.