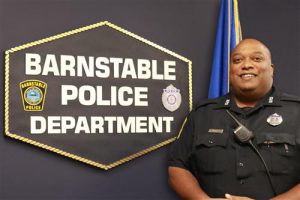 Officer Morrison is otherwise known as the Community Liaison Officer as he is extremely involved in many community events, community organizations such as Kiwanis, Hyannis Elks, Masons, Moose, People of Action and more.  Officer Morrison also works with Toys 4 Tots; Big Brothers/Big Sisters’ and is a mentor to many.

Within the police department he is on the mountain bike patrol, honor guard and the newly formed neighborhood improvement unit. His law enforcement career started in 1993 as a Barnstable Police summer special after a 5 year duty in the United States Navy. Officer Morrison was hired full time in 1997 and being born and raised in this community, he has made community policing his passion. Officer Morrison feels right at home at the HYCC as he interacts with the youth of all ages and bridges the gap between police and the community.