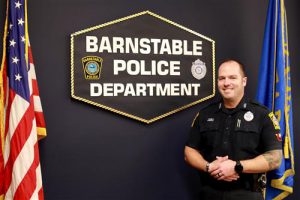 Patrol Officer Christopher Ross was born and raised on Cape Cod, graduating from Barnstable High School in 1997. He then enlisted in the United States Army as an infantryman assigned to the 101st Airborne Division stationed at Fort Campbell Kentucky. Officer Ross attended the U.S. Army’s Airborne, Pathfinder, and Air Assault schools. Officer Ross was deployed to Kosovo in support of the NATO peacekeeping mission there, and was deployed to Iraq during Operation Iraqi Freedom in 2003 where he earned the Combat Infantryman’s Badge and Army Commendation with combat “V” device.

Upon returning to Massachusetts after completion of his military service, Officer Ross attended the Reserve Police Academy in Plymouth and was hired as a Reserve Officer for the Wellfleet, MA police department while pursuing his Bachelor of Science degree in criminal justice administration.

In 2011 Officer Ross was hired full-time by the Barnstable Police Department and is currently assigned to patrol. Officer Ross is part of the marine unit, motorcycle unit, adopt-a-school unit, and is a field training officer. Officer Ross recently completed his Master’s degree in criminal justice at Curry College.

Officer Ross lives in town with his wife Katharine (also a patrol officer) and his two children Madeleine and Gunnar.